Dia de Muertos has inspired the whole world in many ways. Nowadays we have Halloween, which started from the USA and has spread around the world. Nobody can still argue wit the fact that visually the original celebration in Mexico is way more beautiful when it comes to visuality. No wonder that also slot makers are using that in their games and Money Mariachi Infinity Reels from ReelPlay is such game.

Some of you may already know, that Infinity Reels is a feature that was invented by ReelPlay. It means that there is a theoretical chance of getting reels infinitely. However, most likely that is not going to happen. Still, this is a very interesting way of making games and something different compared to the typical setup.

Money Mariachi Infinity Reels was launched in December 2021. It comes with 96.24% RTP which is quite good. 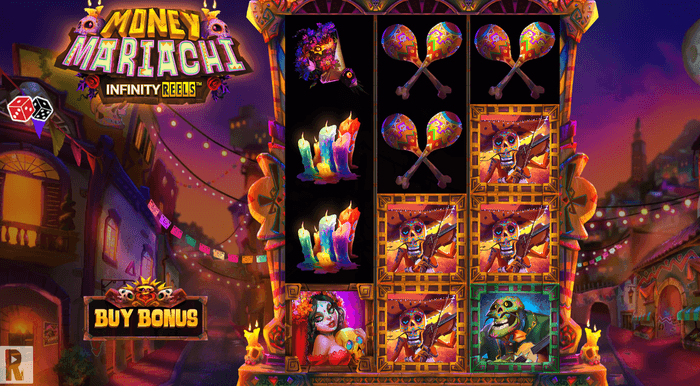 It starts with 3×4 set up. Once you are on your way to a winning combination, a new row will be added to the right. New ones keep coming until the combination has met its end. If you are very lucky, the end will not come very soon.

The maximum winning you can get from this game is 50,000x your bet. Minimum bet is 0.2 and maximum bet is 40. It has a high volatility.

Now the base game itself is very simple and easy to understand. However, there are some very interesting features that makes the game stand out.

As the Infinity Reels itself is a unique feature, the game comes with many more. In the base game you will get an Infinity bonus, if your winning combination is at least 12 reels.

Level up respins is actually what makes the game interesting and to be honest, it has quite complicated mechanics and even for me it took a while to understand it. I kind of like these kinds of games, where you must really think to understand how it works.

The bonus game does not look like a usual game at all and it works a bit differently.

Every time you get a new reel filled; you will get another reel to the right side.

These shrines have a special task in the bonus game. On every round they will gather skulls. Once they have gotten 6 skulls for themselves, they will level up, which means increased winnings.

Once they level up, they might turn into of the following and they all have a different feature.

They randomly be one of the following:

Money Mariachi Infinity Reels is sophisticated slot game with interesting features. The game is at its best when you actually pay attention to it. Otherwise, you will not get the best out of it. Then again, if the mechanics are not your thing, this game stands out just with its graphics and sounds. It indeed gives a great credit to Dia de Muertos. Let us all remember our past loved ones.

Where to play Money Mariachi slot

Snake Arena Dream Drop is a jackpot game from Relax Gaming. It is a sequel slot.