For those who seek for a beautiful, innovative and a different kind of game, Gems Infinity Reels might be the one. This one has a twist: 2 separate reels (dual-reel feature). With the game’s fascinating background graphics, symbols and music you will step into a world of fantasy and princesses. We’ve seen this same theme before in ReelPlay’s games but there’s a reason: players love it. 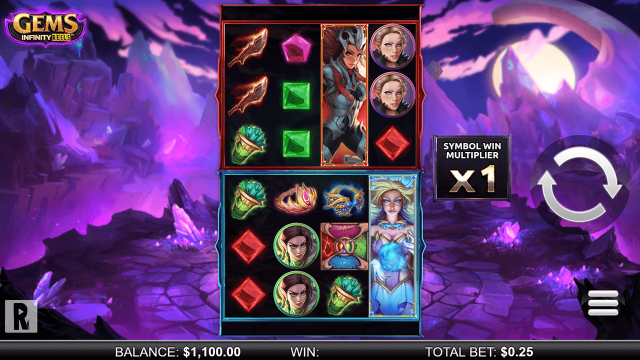 The game starts with 2 sets of reels.

When you open the game you will immediately see 2 separate reel sections. Both of them have 3 rows and 4 reels. Spin them and the game begins. Usually an Infinite Reels game feels like a normal slot at first but the dual reel feature doesn’t give this impression.

ReelPlay has really used their imagination and skills to create a more innovative solution to offer new and exciting gaming experiences.

In this game a win requires 3 matching symbols. You might’ve been used to 5 symbols so the number has been taken down a little. When a player wins so that the fourth reel is included in the win a new reel is added to the right side of it. New reels are added every time the player wins. 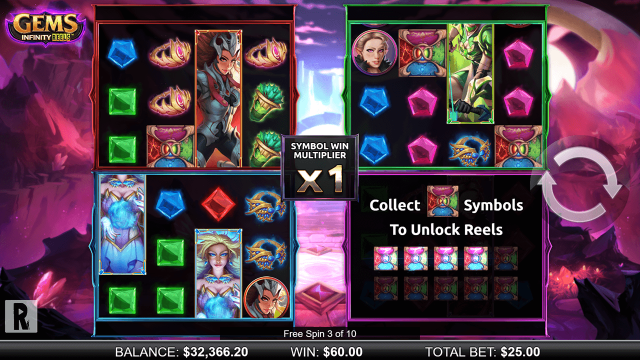 There can be up to 4 separate grids.

Unity Bonus is one of the features in the games. If at least one princess is shown in full, the player is awarded with a bonus prize of 888x.

ReelPlay: Gems Infinity Reels is definitely a game to try out if you’re interested in new features and want to experience something refreshing. Playing with up to 4 separate grids might sound a bit odd but when you get the hang of it it’s definitely worth trying.

ReelPlay is an innovative game provider with an impressive game selection. Infinity Reels is an interesting game series and it’s always good to have something to kind of break the rules. ReelPlay doesn’t just stick to old habits but they create new ones.

Where to play Gems Infinity Reels

Bonus amount must be wagered 20x to claim the bonus. New customers only. 18+ Full T&C Apply