Rise of the Genie slot review

Rise of the Genie is a slot from the famous iSoftbet. As you may know, the provider likes to sometimes to twist a bit of the characters of their games. At least this is what happens in their Twisted Tales -series. However, this slot is not part of the story, but there is still something very strange about it.

By that I am talking about the Genie itself. We are used to having this man bun character as nice, helping, kind, caring and so on. However, this time he is something else. He is far from kind. Are you ready for that?

The game has great graphics, as iSoftbet slots tend to have. The game is set in some Arabic atmosphere and the sounds support that. All of this is very well made, and it is a pleasure to play it when the setup is good.

Now let´s look at the slot features as the gameplay is not very usual.

When you look at the basic game, you might think that the game is something “as usual”, since it has a 5×3 setup. It also has only 5 paylines, which may seem low in the modern world of slots, but to be honest, in this game it is a whole another story.

Also, the RTP is is something you usually see by being 96.46%, being a little bit on the higher side.

It has a medium volatility and the maximum winning from Rise of the Genie is 10,000x. 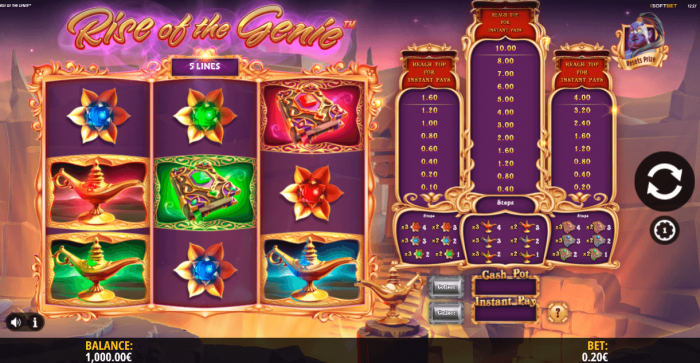 What really makes Rise of the Genie stand out, is the way the paylines and money collecting works, and this is where the evil Genie comes in.

Now, when you gamble “normally”, you would just see the winning combinations hitting the paylines and then the money would instantly be yours. That is not how it works in this game.

Players have 3 cashpots with each of them having several winning combinations to fill them. So, when you hit a win, you will climb on a cashpot for a certain number of steps, based on your combination. The ladder that you are standing, shows the amount you have won. The stars cashpot has the lowest amounts, Books the second highest and Lamps the highest.

Below them you see the total cashpot you have collected. Now, this does not mean that the cash is already yours. It is if you decide to collect it. If you do not, there is a risk you will lose the pot.

How is that possible? It is because of the Genie. If he steps in, you will lose all your winnings. So every time you decide to play another round, trying to reach another step, you also take a risk of being thrown to back to square one.

So, basically each round before cashing out, is gambling. This is what makes the game very interesting. You have 2 on going games at the same time.

And the bittersweet fact is that the one stealing your money is the Genie.

Rise of the Genie does not have a separate bonus game, but to be honest, I don´t think this game even needs one.

It does have a Wild symbol, which can you help to reach the winning combinations.

Rise of the Genie – Verdict

iSoftbet does it again. They have made another masterpiece. This game is some kind of a mix of old school with something very modern. The game keeps you focused as you are following the games at the same time. Be careful, as the Genie can make a visit as many times as he wants.

Where to play Rise of the Genie slot

iSoftbet: Rise of the Genie Reviews by players